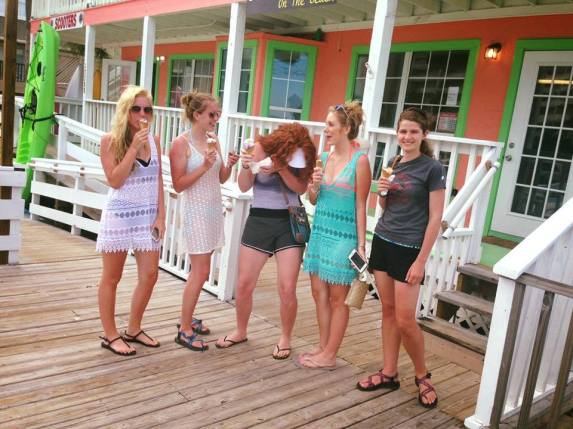 Invite five 18-year-old girls into your home and I promise you it will change your life. This challenge sounds like a nightmare to some of you and I believe it could be in some cases. Yet, when my front door swung wide open and in walked three blondes, a brunette, and lively redhead, nothing was more refreshing.

Let me back track to this past December when my lifelong friend, Melody and I started talking about our plans for the summer. Since I live by the beach and she has a beautiful gypsy soul the conversation soon revolved around the idea of her and a few of her gal pals, possibly making a quick trip to visit Chris and I for a few days. In all honesty, I thought her plan would never get off the ground. Summer schedules are so conflicting and let’s be real, not all parents are wild about their child road tripping down south. Yet, the five preceded forward and it was all too surreal when I saw their Missouri license plate in the middle of a Florida Walmart parking lot.

As I stated, Melody and I have been lifelong friends. We used to sing Justin Bieber songs on our bunk beds at church camp and beyond those days we have grown so much closer as we have aged. She is everything someone would want in a friend. Having her in my life for a few days was such an extravagant gift. I miss the close connections with people from my home state. Since I am not able to visit Missouri as much as I dream about, when friends visit it feels like they are bringing a piece of home straight to my doorstep.

Though the time spent with these five girls was way too short they inspired me to forever hold on to something. Our conversations in the car, along the beach, and on their air mattresses all revolved around one thing. Amongst the tribulations each of them were facing and the insecurities they battled, the girls seemed to revert to a single seam that was stitching their story together. It was in how they spoke and inputted their perspective; all five of them exuded hope. The excitement of dorm rooms, wedding rings, and new experiences are waiting for them on their widening horizon and none of them could keep quiet about it. At least three times a day one of the girls would say, “I cannot wait to go to college. I just cannot wait!”

I may not be 18 anymore or planning to trek across a beautiful college campus anytime soon, but I have just as much reason to live a life filled with a jubilant hope. I should be continuously spouting out in excitement, as the five did during their time spent with me. I should be carrying pure joy in my pocket, not because of the opportunities before me, but because of all that Jesus has done. Why have I not been acting like these girls to better the Kingdom?

The book of Ezra may not have not contain the most Hallmark© inspiring verses you want to write in a card or hang on the wall in your house, but it’s story of how God’s people were fueled by His hope. To me personally, it is completely picturesque. Chapter One shares how God began stirring the hearts of a King, priests, Levites, and heads of the tribe of Judah and Benjamin. He wanted them to travel to Jerusalem to rebuild the Temple of the Lord. Today in the modern world of iPhones and Ace Hardware© construction is still a very big deal. Every project demands a great amount of time, money, and resources. Imagine what a project like this must have looked like in the B.C. era. It would have been an extremely overwhelming task. Then tack on a long, exhausting journey just to get to the project site… this is hard for me to even fathom.

Though it would seem that God’s people would not have a lot to be hopeful about we learn in verse six and seven of this same chapter that the neighbors of the priests and leaders of tribe of Judah indeed were ecstatic about the endeavor. They fully believed in the completion of the rebuilding. It reads, “And all their neighbors assisted by giving them articles of silver and gold, supplies for their journey, and livestock. They gave them many valuable gifts in addition to all the voluntary offerings”, NLT. Thousands of people who were once exiled from the city of Jerusalem returned and they began generously contributing to the rebuilding of the temple.

Ezra 2:68-69 states, “When they arrived at the Temple of the Lord in Jerusalem, some of the family leaders made voluntary offerings toward the rebuilding of God’s Temple on its original site, and each leader gave as much as he could.”

“All the people assembled in Jerusalem with a unified purpose” (Ezra 3:1) and shared that they were afraid of local residents and how they might react to the reconstruction. Yet, the families, workers, and those in full support of this calling from the Lord remained hopeful. They plunged through their fears and chose to press into their faith.

My favorite part of this story begins before the foundation of the new temple is even laid, because this is when God’s people began to party. Days before the foundation was laid the people celebrated the Festival of the Shelters, but the real rejoicing began 15 days prior to this when the people kicked off this pre pre party celebration. They worshipped and offered sacrifices to the Lord praising His name abundantly. Again, I place emphasis on the fact that the process in rebuilding the foundation had not even began, literally nothing was set in stone, but God’s people placed their hope in Him. They were excited and knew that He was going to do amazing things.

When the foundation was finally complete, again, God’s people praised him. “The priest put on their robes and took their places to blow their trumpets. And the Levites, descendants of Asaph, clashed their cymbals to praise the Lord, just as King David had prescribed. With praise and thanks, they sang this song to the Lord: ‘He is so good! His faithful love for Israel endures forever,” (Ezra 3:10-11).

Years later the construction had finally concluded, the Temple was complete, and once again the people partied, exalting the name of the Lord. Hearts had been changed, people had been set free (remember the rejected exiles), and God had used thousands to honor His kingdom all because they placed their hope in Him.

Our joy should not stem from the ideas of our present happiness in events of today or fruitful opportunities of the future. The name of Jesus alone is a celebration and this is the only thing we, as His people, should place our hope in. His promises are the only genuine reason of why we can remain optimistic and live in peace. Not only do I want to hold on to hold on to this hope, I want to offer it to those around me with arms wide open. This hope is fulfilling, noble, Holy, and every positive adjective that pops into your head. I want to act like an 18-year-old every day and have the Holy Spirit continually stream through my words and actions. This my prayer over myself and for you, because when we say the name of Jesus, as my friend Annie F. Downs says, “things change”.

The world may view these five girls, and thousands of others like them, as naive and immature, but I will tell you that they are much wiser beyond their knowledge of matte nail polish. They blessed this, at times very lonely, Florida girl with an outpouring of hope; the hope of lovely days ahead, lasting friendships, and beautiful reminders of just how marvelous our loving Jesus is. This is the hope I have and forever want to celebrate.

My door is always open girls. Thank you.